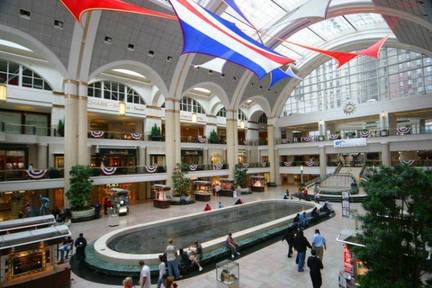 “President Obama’s and Mitt Romney’s simultaneous visits to Ohio on Wednesday show just how pivotal that battleground state has become. As they fired charges at one another over trade and China, each claimed to be the candidate who could best boost economic growth in the state.”

“For me, the key question is, Why? If the stimulus has in fact had such positive impact, why do Americans remain so skeptical about it and government spending in general? In a 7,000-word magazine story, I would have liked to hear more from ordinary Ohioans about how they see the stimulus, the bailout, and the overall role of government. Virtually none appears in Bai’s article, however. He spoke mainly with officials—governors, mayors, senators, even Treasury Secretary Timothy Geithner. In measuring the state of public opinion in Ohio, he relied heavily on polls. His story reminded me of correspondents who, traveling to war zones, spend most of their time in the company of generals and colonels. Such officers can be informative, but it’s only by speaking with civilians on the ground that journalists can get a full picture of the progress of a military campaign.”

“Truth be told, I’m not sure if such reporting was ever in fashion. Ever since Theodore White came out with The Making of the President about the 1960 race—a book that for the first time took readers behind the scenes of the political process and showed all the gambits and strategy involved—campaign reporting in America has become progressively an insiders’ game. We’ve had The Selling of the President by Joe McGinniss, What It Takes: The Way to the White House by Richard Ben Cramer, and Game Change by John Heilemann and Mark Halperin, with its titillating tidbits about Obama and Clinton, McCain and Palin. Speaking with consultants and pollsters is a lot easier than buttonholing people in shopping malls or striking up conversations in a bar or restaurant. As a result of this tendency, however, journalists remain largely in the dark about the underlying political and social forces shaping the nation’s future.”

Michael Massing has a point, but Massing forgets that ordinary people in shopping malls, restaurants and bars rely heavily on the media for their opinions. They make sense of reality with the help of “insiders” and spin doctors.