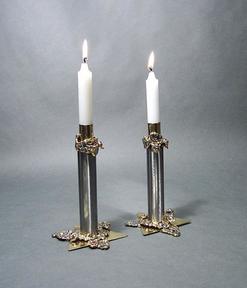 Obama is a “Shabbat-friendly boss” according to an article in Ha’aretz:

‘When Jack Lew was appointed chief of staff to President Obama in January, many in the Jewish community wondered how he could observe Shabbat in such a demanding position.   Luckily, Lew has the most powerful man in the world to keep track of time as the sun starts to dip low in the sky on Friday afternoons.  “ I saw the president on many occasions on Friday afternoons look at his watch, and ask: ‘Isn’t it time for you to get going?’” Lew said, “or, ‘Why are you still here?’ The president was not checking the clock “because he doesn’t think I can keep time,” Lew said. Rather, the extra care on this issue reflects the President’s wish “to remind me that it’s important to him, not just to me, that I be able to make that balance.”   Lew, who is Orthodox, revealed the details about his keeping Shabbat in an extraordinary interview with the Forward that touched on his need to observe the Jewish holy day.  “ And he’s respected that time and again,” the chief of staff said of Obama.   The chief of staff noted it was Obama who brought up the issue of Shabbat when first offering Lew the job.   “He raised it with me saying: ‘I know that things are going to come up where there’s an emergency on Saturday or that you need to be here. I know you well enough to know that this is not an issue. I want you to know that I’m never going to ask you to work on Saturday if it’s not really necessary. It’s important for me that you know that.’”   On his behalf, Lew provided the President with his own assurances.   “I’ve made it clear,” Lew said, “that you don’t have to wonder if there’s a crisis whether I’m available. If you need me, I don’t even consider it a violation of my faith to be doing the things I need to do to make sure people are not in harm’s way.”’

I cannot imagine the prime minister of the Netherlands to be a “Shabbat-friendly boss”.