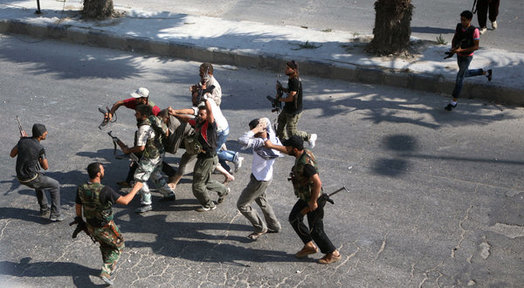 ‘Syria’s rebel fighters — who have long staked claim to the moral high ground for battling dictatorship — are losing crucial support from a public increasingly disgusted by the actions of some rebels, including poorly planned missions, senseless destruction, criminal behavior and the coldblooded killing of prisoners.
The shift in mood presents more than just a public relations problem for the loosely knit militants of the Free Syrian Army, who rely on their supporters to survive the government’s superior firepower. A dampening of that support undermines the rebels’ ability to fight and win what has become a devastating war of attrition, perpetuating the violence that has left nearly 40,000 dead, hundreds of thousands in refugee camps and more than a million forced from their homes.
The rebel shortcomings have been compounded by changes in the opposition, from a force of civilians and defected soldiers who took up arms after the government used lethal force on peaceful protesters to one that is increasingly seeded with extremist jihadis. That radicalization has divided the fighters’ supporters and made Western nations more reluctant to give rebels the arms that might help break the intensifying deadlock. Instead, foreign leaders are struggling to find indirect ways to help oust Syria’s president, Bashar al-Assad.
And now arrogance and missteps are draining enthusiasm from some of the fighters’ core supporters.
“They were supposed to be the people on whom we depend to build a civil society,” lamented a civilian activist in Saraqib, a northern town where rebels were videotaped executing a group of unarmed Syrian soldiers, an act the United Nations has declared a likely war crime.
An activist in Aleppo, Ahmed, who like some of the others who were interviewed gave only one name for security reasons, said he had begged rebels not to camp in a neighborhood telecommunications office. But they did, and government attacks knocked out phone service.
One fighter shot into the air when customers at a bakery did not let him cut into a long line for bread, Ahmed recalled. Another, he said, was enraged when a man washing his car accidentally splashed him. “He shot at him,” Ahmed said. “But thank God he wasn’t a good shot, so the guy wasn’t hurt.”’

A year ago I believed that the West should do much more to support the Syrian rebels, now I’m not convinced that this is the way to go, and not only because of this article.
Indeed, there is a case to be made that the West should stay out of Syria. The problem is of course that foreign powers (Iran, the US, Qatar, Turkey and Saudi Arabia) are heavily supporting one of the two sides. As Hussein Agha and Robert Malley wrote in the NY Review of Books Syria is already the arena “for a regional proxy war”.