The book was better 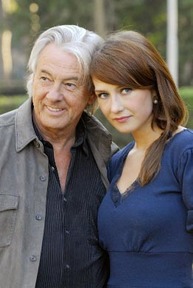 At Lincoln Plaza Cinema while waiting to see the movie Red Road I was listening to the conversation of a couple sitting a few rows in front of me.
He was bald, and speaking extremely loud.
She was younger, and whispering.
She told him that she had seen Black Book the other night.
“How was it?” he asked.
“Good,” she said. “About the resistance in World War II.” “Oh yeah, who directed that movie again?” “I don’t know,” she said. “It seemed to me foreign. But then you know, in Hollywood-style. And the book was better,” He sighed. “The book is always better. And do you know why?” Unfortunately he was not able to explain why the book was always better because the previews began.

Red Road was worth seeing, but quite long so there was no time afterwards to go to my favorite Sant Ambroeus for pasta.
I went to Sushi Samba instead for tiradito.
Sushi Samba was rather empty. A man alone sat at the bar.
No conversations to listen to. I concentrated on my book.