Born to be a con artist 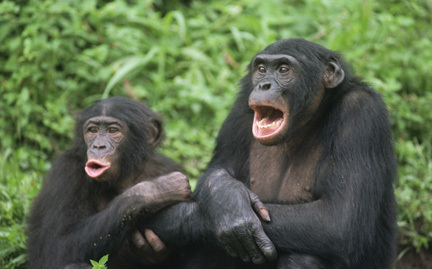 A friend alerted me to this excerpt from Frans de Waal’s new book “"The Bonobo and the Atheist" on Salon.com:

‘Much of postwar Dutch literature is written by ex-Protestants bitter about their severe upbringing. “Whatever is not commanded is forbidden” was the rule of the Reformed Church. Its insistence on frugality, black dress code, continuous fight against temptations of the flesh, frequent scripture readings at the family table, and its punitive God—all contributed greatly to Dutch literature. I have tried to read these books, but have never gotten very far: too depressing! The church community kept a close eye on everyone and was quick to accuse. I have heard shocking real-life accounts of weddings at which the bride and groom left in tears after a sermon about the punishment awaiting sinners. Even at funerals, fire and brimstone might be directed at the deceased in his grave so that his widow and everybody else knew exactly where he’d be going. Uplifting stuff.
In contrast, if the local priest visited our home, he could count on a cigar and a glass of jenever (a sort of gin)—everyone knew that the clergy enjoyed the good life. Religion did come with restrictions, especially reproductive ones (contraception being wrong), but hell was mentioned far less than heaven. Southerners pride themselves on their bon vivant attitude to life, claiming that there’s nothing wrong with a bit of enjoyment. From the northern perspective, we must have looked positively immoral, with beer, sex, dancing, and good food being part of life. This explains a story I heard once from an Indian Hindu who married a Dutch Calvinist woman from the north. Although the woman’s parents didn’t have the faintest idea what a Hindu was, they were relieved that their new son-in-law was at least not Catholic. For them, belief in multiple deities was secondary to the heretic and sinful ways of their next-door religion.’

I’m not sure if Mr. De Waal has ever tried reading Jan Wolkers. But he could write a book titled “In Praise of North Brabant”.

Frans de Waal has more important things to say about belief and atheism: ‘Dogmatists pound their drums so hard that they can’t hear one another. Their audiences, on the other hand, are unaware of the traveling dog and pony shows featuring the same adversaries over and over, who simulate surprise and “gotcha” moments. The only voice of reason in Puebla was that of Dan Dennett, who spoke about religion not as something hateful but rather as a phenomenon that begs investigation as part of human society, human nature even. Clearly, religion is man-made, so the question is what good does it do for us. Are we born to believe and, if so, why? Dennett is not as sure as the neo-atheists with whom he is often lumped together that religion is irrational or that the world would be a better place if its demise were hastened, noting, “I am still agnostic about that.”’