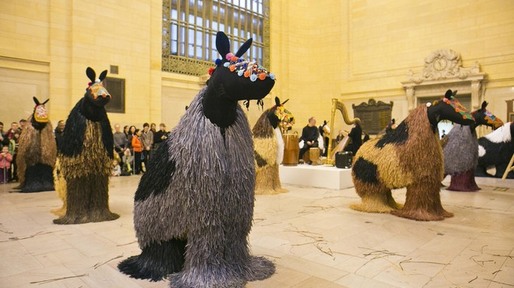 A friend told me about Nick Cave’s project at Grand Central Station.
(For more information click here.)
He wrote: “This may or may not be up your alley, but as you live relatively close to Grand Central, if you get a chance, you might check out the Nick Cave horses in Vanderbilt Hall at 11 or 2.” Well, this was up my alley, if anything I’m a horseman, at least in my imagination.
So this afternoon I went to Grand Central Station. First I had a bite to eat at Cipriani Dolci. I saw several people with really funny hats. Perhaps this was one of the many Easter traditions I’d never heard of. Or there was a Funny Hat Competition going on.
Next to me at the bar sat a couple (with funny hats) and they asked the bartender: “When does the horse show start?” The bartender didn’t know, so I said: “At two.” They left before me. It was ten to two when I arrived at the entrance of the Vanderbilt Hall. There was no way to get into the hall. The crowd was getting thicker by the second, I was doubtful whether most people knew that they were waiting to see Nick Cave’s horses. I stood next to a woman with sunglasses who was consoling another woman with words like: “He was just not for you.” And: “You’re better off without him, he had no job, at best he was self-employed.” The conversation made me slightly nervous. Shortly after two o‘clock another woman said: “They don’t let anybody in. I'm going home.” More people left. I waited a few minutes; then I decided to go home as well. No horses, but a few funny hats. On Easter you should be grateful for everything.