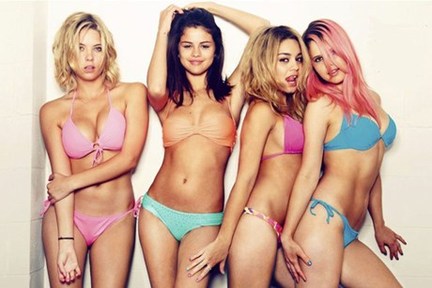 The 1995 movie “Kids”, written by Harmony Korine and directed by Larry Clark, is about a bunch of teenagers in New York. They have sex, they do drugs, they get HIV and post coitum omne animal triste est.
Harmony Korine (1973) didn’t lose his interest in sex and youth culture, which is just another word for American or Western culture.
Good for him.
Now there is “Springbreakers”, written and directed by Harmony Korine. I was intrigued after a rather raving review in the NY Times, so I went to see the movie.
“Springbreakers” is about guns, sex, cocaine and college girls. I’m not sure if this is what American culture is about, but the movie definitely has something to say about the average male fantasy: at least two college girls and a swimming pool, but preferably three college girls, a swimming pool and a white piano. And women of course have internalized the male fantasy.
One could argue that Korine is telling us that eternal spring break is the modus vivendi of American culture. But this is a rather mundane observation.
The movie is not provocative because of cultural criticism – there is not much cultural criticism in this movie. There is above all body culture and South Beach. (Perhaps we should think of South Beach as cultural criticism.)
“Springbreakers” wants to be titillating and at the same time wants us to feel bad because we are titillated. This is why irony has a bad name in certain circles.
Korine's movie is a serious and laudable attempt at soft porn, the reason that some people felt provoked by this movie must be connected with the fact that we are so used to hard porn that soft porn has become provocative.
But despite some objections I would love to see this movie win a few Academy Awards. The more or less perfect body of a college girl in bikini is our only redemption. There is sex and there is sex with guns, which is better sex. “Springbreakers” rubs it in. We miss something, but help is on its way. Perhaps Korine is telling the movie industry: take self-knowledge seriously.
Okay, that is cultural criticism.
A friend once told me that his mother had said: “Bikini is a state of mind.” According to “Springbreakers” bikini is the only state of mind.