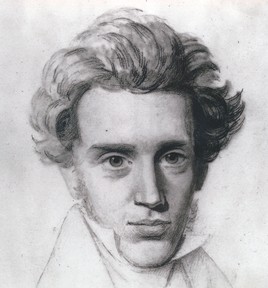 ‘But our faith in freedom is excessive. It would be naive to think that happiness requires nothing more than the freedom to choose. Modernity cannot evade tragedy and in fact Kierkegaard proceeds to outline a modern version of Sophocles’ play — a post-Socratic “Antigone.” The Danish term he uses for hereditary guilt literally means “inheritance-guilt,” which unlike the English term calls to mind the wealth and property left to children upon their parents’ death. The term is especially appropriate for his modern Antigone, who considers the curse on her father not so much a disease as a birthright. In Kierkegaard’s modern play, the drama does not revolve around her brother’s treason, death and burial but concerns Antigone’s relation to her father and his crimes.’

‘Life is partly a task and partly a gift, Kierkegaard wrote. Unlike a curse, a right or a genetic disease, a gift cannot be bestowed upon a person against her will. She can choose to accept or decline it. A child does not choose her parents but is offered them as gifts upon her birth, and to love them and grieve with them is to appropriate them as her kin. Love is this project of accepting a gift, cultivating a heritage, assuming another’s fate as one’s own. If freedom is the ailment, it is willful surrender to her emotions and her ties to others that is the modern Antigone’s redemption.’

Life is a gift and a task, indeed. And the “inheritance-guilt” comes from the gift, giving is never a frivolous action. By accepting your gift I tacitly understand that the day will come that I’ll be obliged to give you something. And when it comes to the “gift of life” it is even more complicated, because the receiver is in no position to refuse the gift, to say: “No, I cannot accept this, it’s beautiful but not for me.” (Until of course much later in life.)