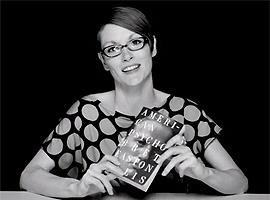 A friend alerted me to Hysterical Literature: The Orgasm As Art:

And here is an interview with Clayton Cubitt on Salon:

“This is probably an annoying question, but what’s the “artistic vision” behind the series?  The title is a winking reference to the quack Victorian medical theory of “hysteria” in women, and the vibrators and hydrotherapy treatments used to “cure” them. On an individual level, I’m interested in the battle the sitter experiences between mind and body, and how long one retains primacy over the other, and when they reach balance, and when they switch control.
On a larger scale, I’m interested in how society draws a line between high and low art, between acceptable topics of discussion and taboo ones, between what can be worshiped and what must be hidden.
This project touches on all these themes, while also just being really fun to watch.
Have there been times where the reader hasn’t climaxed? Any concerns about readers faking it? I make it very clear to them that it’s more about the journey than the destination, and that I’m more interested in the process than any specific result. There should be no judgment in anthropology. Most sessions have lasted between five to eight minutes. A couple have gone to 15 minutes with no orgasm, at which point I end it. I don’t know if the longer ones will be published online, as the medium tends to not do well with long watching times.
As for faking, I’m not too concerned with it, and while the process itself can create pressure to “perform” for the camera at first, it seems that the distraction caused by enclosing oneself in a very personal reading selection seems to put every subject at ease, and they often forget about the camera after a couple minutes.”

There’s a point with each reader where I could not concentrate on the text anymore. Not only because of the reader, but also because of the text.
Besides everything else this is also a competition between literature and the orgasm.