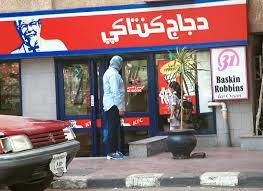 ‘Even as Israel has relaxed restrictions on imports over the past few years, hundreds of illegal tunnels have flourished in Rafah. Weapons and people are smuggled underground, but so are luxury cars, construction materials and consumer goods like iPads and iPhones. And now: KFC.
Formerly called Kentucky Fried Chicken, a KFC franchise opened in El Arish, just over Gaza’s southern border, in 2011, and in the West Bank city of Ramallah last year. That, along with ubiquitous television advertisements for KFC and other fast-food favorites, has given Gazans a hankering for Colonel Sanders’s secret recipe.
So after Mr. Efrangi brought some KFC back from El Arish for friends last month, he was flooded with requests. A new business was born.
“I accepted this challenge to prove that Gazans can be resilient despite the restrictions,” Mr. Efrangi said.
In the past few weeks, Mr. Efrangi has coordinated four deliveries totaling about 100 meals, making about $6 per meal in profit. He promotes the service on Yamama’s Facebook page, and whenever there is a critical mass of orders — usually 30 — he starts a complicated process of telephone calls, wire transfers and coordination with the Hamas government to get the chicken from there to here.
The other day, after Mr. Efrangi called in 15 orders and wired the payment to the restaurant in El Arish, an Egyptian taxi driver picked up the food. On the other side of the border, meanwhile, Ramzi al-Nabih, a Palestinian cabdriver, arrived at the Hamas checkpoint in Rafah, where the guards recognized him as “the Kentucky guy.”’

If tunnels between Gaza and Egypt are used to smuggle KFC chicken it’s probably a safe bet that the next war will be on Israel’s northern front.