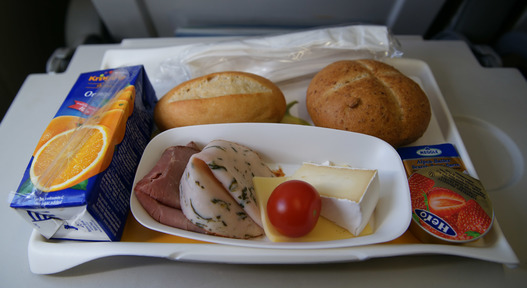 For a long time I believed that the food served by major European airlines in economy class was slightly better than the food served by their American counterparts. It’s all anecdotal evidence of course, but in my experience especially Air France did make an effort to serve rather decent food on intercontinental flights.
Today I took a Lufthansa flight from Frankfurt to JFK and I was served the saddest salad I’ve seen in my life. We have all heard that American Airlines got rid of the last olive on its salad a decade ago or so but my salad today went far beyond the absence of olives.
This salad reminded me of dry grass rejected by sick cows.
Of course this salad may pay the shareholders of Lufthansa bigger dividends. And since I’m both a shareholder of Lufthansa and an occasional customer I was in an awkward position.
But money is not an end, and therefore both as a shareholder and an occasional customer I’d like to tell Lufthansa: improve your salad.