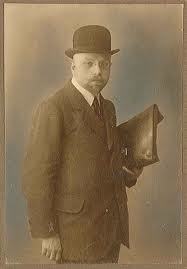 Day seven in the mental institution – no therapy today, it’s Sunday.
So now for something completely different: Jacob Israel de Haan. It’s 89 years ago that on this day the Dutch poet and novelist Jacob Israel de Haan was gunned down in Jerusalem. Read this excellent article David B. Green in Ha’aretz:

‘Jacob de Haan was born on December 31, 1881, in Smilde, in the northern Netherlands. His family was traditional – his father was a ritual slaughterer and cantor – and he was said to be one of 18 children.
De Haan studied law and worked as a teacher in Amsterdam when in 1904 he published his first book, “Lines from De Pijp,” a thinly disguised autobiographical novel about a supposed relationship with the scholar Arnold Aletrino, to whom he also dedicated the work. De Haan was dismissed from his teaching position and from a newspaper column he wrote for children. Meanwhile his fiancée and Aletrino (a criminal anthropologist and married man who had publicly defended homosexuality) bought up all of the book’s first printing, to prevent its distribution. The author then reworked the book without the elements that alluded to Aletrino.’

‘In 1922, the same year that Jacob de Haan defended Agudath Israel, the Haredi political movement, in a legal trial over its refusal to pay a new excise tax levied by Zionist authorities on matzot before Passover, he also met with Lord Northcliffe, founder of the Daily Mail newspaper in London, when the latter visited the region. He shared his anti-Zionist views with Northcliffe and those views were reported back in the United Kingdom. Soon, de Haan was offered work as a correspondent for the tabloid Daily Express. De Haan also met with Hashemite leader Hussein bin Ali, the King of Hejaz, to discuss the establishment of a Palestinian state.
By now, de Haan had become a liability to the Zionist movement, and especially dangerous because of the platform he now had for spreading his views in London, where critical decisions about Palestine were made. In Jerusalem, he became persona non grata among Zionists, including his law students. One anecdote has him walking with a Dutch visitor, who observed that as people passed them into the street, they were spitting on the sidewalk. The visitor thought this was a sign of disrespect, to which de Haan responded, according to Dutch historian Ludy Giebels: “"Oh no, they spit on the street out of respect for you, your presence. Otherwise they would have spit in my face."’

Sometimes when I pass strangers they spit on the sidewalk as well. Now I know that this is a sign of respect.