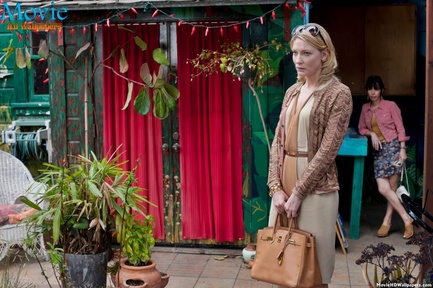 ‘Woody Allen’s startlingly powerful homage to “A Streetcar Named Desire” is dramatized in a curt, decisive manner—a “late” style, if ever there was one. In place of Blanche DuBois, the ruined Southern belle who believes in art and gentleness and depends on the kindness of strangers, Allen has given us Jasmine (Cate Blanchett), a contemporary Park Avenue woman who believes in luxury and status and depends on the kindness of wealthy men. But Jasmine’s high-finance husband (Alec Baldwin) turns out to have been a swindler, and Jasmine has lost everything.’

Much has been said already about the resemblance between the swindler in Woody Allen’s movie and Madoff. Woody Allen may romanticize working-class men in this movie, they are violent but at least they don’t cheat on their girlfiends and their emotions are genuine – his affection for the swindler is undeniable.

Cate Blanchett is marvelous as Jasmine who is overcome by jealousy and who escapes to the world of delusions.
Woody Allen reminds us that delusions are commodities – only the rich can afford certain delusions.