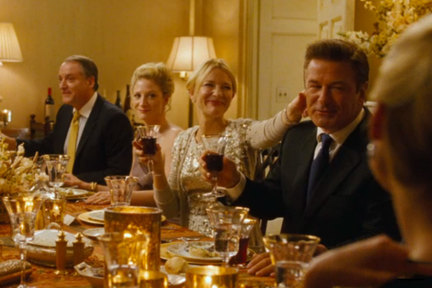 An interesting piece of criticism by Francine Prose on Woody Allen’s “Blue Jasmine”:

“Blanchett’s performance is so riveting, and the film is so entertaining, that it took me until the next day to figure out why I’d found Blue Jasmine distasteful. That morning, my husband said he’d awoken in the middle of the night feeling as if we’d watched a film in which a woman is beaten, degraded, humiliated, tortured—a snuff film whose victim is driven mad but allowed to live.”

“How many hours have I spent in the dark, trying to like the films of Woody Allen? Part of what’s so disappointing about Blue Jasmine is that I so admired Match Point and Vicky Cristina Barcelona. I loved the Hitchcock-like suspense and rhythms of Match Point, the sunny pleasure that Vicky Cristina Barcelona took in a beautiful city and beautiful faces. The performances were thrilling. I was so impressed by those films that I was willing to give Allen a pass on Midnight in Paris (2011), with its freshman-undergraduate take on the Left Bank in the 1920s, and the frothy travelogue that was To Rome with Love (2012). I like looking at pictures of Rome! But thinking about Blue Jasmine reminded me of what I’d found disturbing about Allen’s earlier films: Annie Hall (1977), Manhattan (1979), Stardust Memories (1980), and Celebrity (1998). The misanthropy and misogyny; the meanness masquerading as humor; the thick air of condescension; the sourness and crabbed resentment.”

“I prefer not to think that we live in a culture in which nastiness is so endemic that we can no longer recognize it. Unless in fact we do, and, like the ancient Romans at the Colosseum, we’re grateful for the distractions of socially sanctioned cruelty and the gladiatorial combat of the strong against the weak.”

(See also here for another perspective on "Blue Jasmine".)

Woody Allen’s best movie is in my opinion “Zelig”. But that’s another debate.
I’m doubtful whether “Annie Hall” and “Manhattan” will live up to my memories when I watch these movies again, but to accuse Woody Allen, based on these movies, of misogyny seems to me a bit frivolous. “Blue Jasmine” is perhaps not a great movie, but it’s good enough to watch and the fact that the main character is a woman and that there is no happy ending for her doesn’t make the director and screenwriter a misogynist.
Or we should accuse Mr. Flaubert of misogyny because of Madame Bovary's undoing?

Francine Prose seems to accuse Mr. Allen of the fact that the human race doesn’t live up to the lessons we learn in Sunday school.
Some people want the artist to tell the sweet lies they used to hear in church and synagogue.
And above all, comedy and satire require a dose of misanthropy.
Chaplin, the Marx Brothers, Keaton, Tati -- no misanthropy? No nastiness? No moral ambiguity? Even the moralist Chaplin could not escape moral ambiguity, because thank God in the end he preferred comedy to moralism.