Cut off one arm 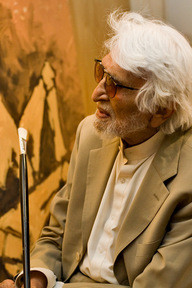 It’s not only the prophet. Today in the International Herald Tribune:

“The plight of one of India's leading painters is raising alarms among the country's artists, who say the government is doing little to protect him from Hindu extremist groups who insist his work is obscene and promotes religious enmity.
Since early last year, Maqbool Fida Husain, 91, has lived in self-imposed exile, mainly in Dubai, wary of returning to his homeland in the face of death threats and attacks on his paintings.
Numerous lawsuits have been filed against the artist by rightist groups that declare themselves outraged that Husain, a Muslim, should have painted pictures of Hindu goddesses in the nude. In recent months, one Hindu extremist placed a bounty on Husain's head and the leader of the northern wing of India's hard-line Hindu Shiv Sena movement offered half a million rupees, or about $13,000, to anyone who would cut off one of Husain's arms.”