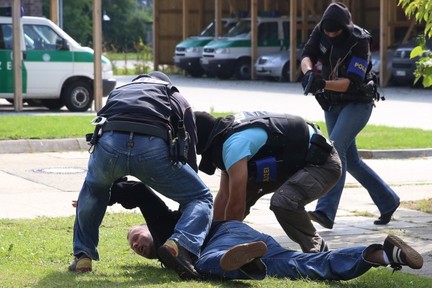 The Oktoberfest, Friday afternoon around 6:30 p.m. While I was eating duck and drinking beer with actresses, a writer, a theater critic and some other decent people I noticed how 4 or 5 cops were beating up a young man. Finally they managed to restrain him; they cuffed his hands and feet.
A young woman in dirndl, probably the girlfriend of the young man, was crying. She tried to remove blood from his lips with a handkerchief. He was bleeding from his nose, and he had wounds on his knees and elbows.
After about ten minutes the paramedics arrived. The paramedics observed him shortly and then they put something that looked like a dressing around his neck. Before they could do that his girlfriend had to remove his necklace.
After that the paramedics put the shackled man on a stretcher.
I have no idea what had happened before the cops started hitting the man, but when I see a fight between uniformed and ununiformed people I usually sympathize with the ununiformed people.