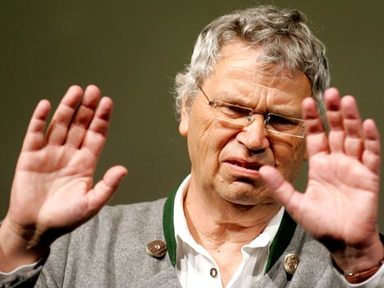 I knew the city of Rosenheim because of the movie “Out of Rosenheim - Bagdad Cafe”, but tonight I went to Rosenheim to see the comedian Gerhard Polt.
(See here for a sample of his work. Apologies to those who are not able to understand German or to be more precise Bavarian.)
I missed at least 40% of the jokes tonight, because after a month in Munich my comprehension of the Bavarian dialect is still not good enough. Polt is a true populist in the good sense of the word and I’m afraid that he is extremely conservative as well, but his work could also be seen as criticism of Bavarian conservatism.
There are two types of comedians, there are comedians who belong to the majority and there are comedians coming from minority communities. Polt belongs definitely to the first group. But fair enough, he is an inclusive member of the majority. As he said tonight: “Decent people are invited to join the majority.”