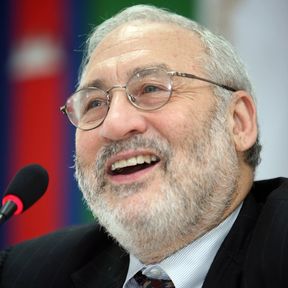 This article by the economist Joseph Stiglitz is worth reading, but he is unfair to Merkel and Draghi: “Officials like Angela Merkel, the newly re-elected German chancellor, and Mario Draghi, president of the European Central Bank, argue that Europe’s problems are a result of a bloated welfare spending.”

Seriously? I would argue that Angela Merkel’s position is much more nuanced and I’m not sure to what comments by Draghi Stiglitz is referring. Bloated welfare spending is not the same as austerity. And to avoid misunderstandings, I'm not in favor of austerity.

Stiglitz again: “For these reasons, I see us entering a world divided not just between the haves and have-nots, but also between those countries that do nothing about it, and those that do. Some countries will be successful in creating shared prosperity — the only kind of prosperity that I believe is truly sustainable.”

Fair enough, but what countries exactly live up to Mr. Stiglitz’s expectations? When is shared prosperity sustainable prosperity? How much inequality is Mr. Stiglitz willing to accept? And is income equality just a matter of better and tougher taxation?

Some economists sound like priests and ministers. Perhaps we need economists who talk like a minister nowadays, but I expect of a scientist more than an uplifting sermon.