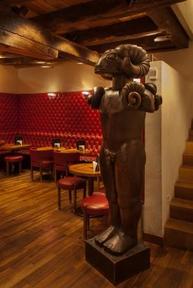 After the reading in in Kaufleuten, a charming club/restaurant/theater in Zurich – I was enthusiastic about the poet Nora Gomgringer – we went with my godson, his mother, a friend and people from my German publisher Diogenes to the Widder Bar.
While I was working as a steward in the dining car on Swiss trains in the summer of 2008 I spent some nights after work in the Widder Bar.
Tonight, a lonesome nightclub piano player was playing the synthesizer with a certain amount of passion. He looked frozen, but his voice was powerful, his voice was a standing invitation to dance.