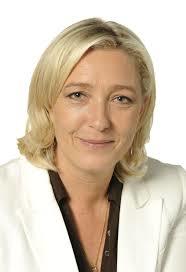 ‘Marine Le Pen and Geert Wilders, two of Europe’s best-known far-right leaders, vowed to fight side by side in a coalition of nationalist parties in next year’s European Parliament elections to bring down the “monster in Brussels”.
The anti-EU alliance between the French National Front party (FN) and the Dutch Party for Freedom (PVV) will seek to attract other eurosceptic groups as they try to capitalise on the economic misery and high unemployment plaguing the continent.

“The day when patriotic movements were divided, sometimes in fear of being demonised, is long gone . . . a new era has begun,” said Ms Le Pen, leader of the neo-fascist FN, as she stood next to Mr Wilders in The Hague on Wednesday.’

If we call Front National neo-fascist, what are we going to call Mr. Wilders? After all, the Financial Times is not your average leftist newspaper.