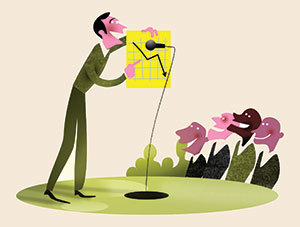 Approximately two weeks ago, over dinner the economist Deirdre McCloskey told me that she had just returned from Ireland, from a conference that mixed economists with comedians.
I had no clue what to think about a conference for economists and comedians, but we had many other things to discuss so I don’t press her for more information.
But today I read Simon Kuper’s report on this “comedy economics festival”.

Kuper: “Some of the speakers were big-shot American economists. But they came unpaid, and once in Kilkenny, far from global power, everyone shed their guru status. It’s such a small place that almost any pub you stumbled into, however far past midnight, was bulging with famous economists in T-shirts gabbing with ordinary punters. Most tickets to events cost from €5 to €15. This wasn’t a Goldman Sachs investors’ conference.
Kilkenomics’s founder, the Irish economist David McWilliams, calls it “bringing economics to the people”. Being Irish, he draws a parallel with Catholicism. “Economists,” he explains, “were like medieval priests who had a special relationship with God and spoke in Latin to the average punter, and said, ‘This is way above your head. Don’t worry about it.’”

“I’ve been to lots of festivals and conferences, but Kilkenomics may be the best. More than that: it felt like democracy. It recalled the 1960s “teach-ins” on American campuses. It reminded me of the proposal by Bruce Ackerman, Yale law professor, to sit ordinary people down with experts to talk through complicated issues like the Tobin tax or British membership of the European Union and actually change some minds. Kilkenomics could work far beyond Kilkenny.”

Kuper has a point; perhaps time has come again for teach-ins.
Also we may have learned that democracy without comedians doesn’t really work. You want democracy? First invite the comedians, then invite the experts, organize a teach-in, get drunk.