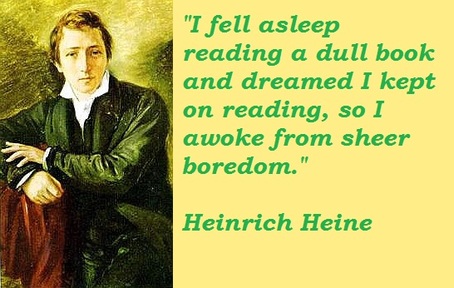 Heinrich Heine in his memoirs: “Zippel was the name of a person of no very great age — her real name was Sibyl — who was my first nurse and stayed on with us. She was in the room, by chance, on the morning when old mother Hader, Jupp's mother, bestowed such praises upon, and expressed wonder at, my beauty. When Zippel heard these words, there awoke in her the old superstition that it is harmful for children to be so praised, since they are brought by it to sickness or some evil chance, and in order to avert the evil with which she believed me to be threatened, she resorted to the method recommended as infallible by popular belief, which consists in spitting three times at the child who has been praised. She came bouncing towards me, and hurriedly spat three times on my head.

The spitting was only a provisional precaution, for those who are wise in these matters maintain that when the perilous words of praise have been pronounced by a witch the baleful spell can only be broken by a person who is also a witch, and Zippel resolved the very same day to go to a woman whom she knew to be a witch. This woman, as I learned later, had been of great service to Zippel through her secret and forbidden art. The witch cut off a few hairs from the crown of my head and then stroked the place with her thumbs which she had moistened with spittle : in the same way she stroked other places while she murmured all kinds of mystical abracadabra nonsense, and that was how at such a tender age I was ordained priest of the devil.”

Today, I read parts of Heinrich Heine’s memoirs (in Dutch translation) in a theater in Rotterdam. Marc Pantus sang some Heine’s poems, in German of course.

Interestingly enough, I was not able to find in the translation by Gilbert Cannan that part of the memoirs that deals with witches stealing penises. Perhaps I overlooked it, or it was left out in an attempt to be decent. (You can find the English translation of the memoirs here. See also here and here.)

Ich will in ländlicher Stille