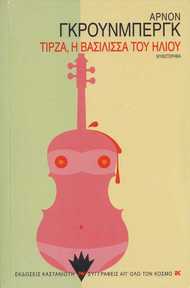 Tonight, Tuesday December 10th, was the premiere of the theatrical adaptation of my novel “Tirza” in the Ilisia Theater in Athens.
I couldn’t understand more than four words, but the emotions were intense and the actors were very good.
The scene between Tirza and her father about the question when and by whom she should be deflowered almost made my cry, I have to admit.

Here’s part of that scene in English, in Sam Garrett’s translation:

‘Three years ago, only a few weeks after the wife disappeared on her way to the houseboat, Tirza had asked at dinner one night: "Papa, when am I going to lose my virginity?"
Hofmeester was busy spooning up dessert, panna cotta from the delicatessen a few streets down. He heard what she asked, and stopped spooning. Then he glanced at his watch. "Everyone loses their virginity," he said. "Sooner or later it happens to everyone, Tirza."
"In my class almost everyone's lost their virginity already. When's it going to happen to me, for God's sake? You're the one who knows everything, aren't you?"
"Not everything. In fact, not much." He licked his spoon and put it down. He didn't feel much like panna cotta anymore.
"But you have an opinion on everything, right? You've got an opinion about the weirdest things. What's your opinion of the fact that I haven't lost my virginity yet? That everyone in my class has already lost their virginity, except for the idiots, the nerds and the pimple-faces, everyone else except for me. What do you have to say about that?” Ibi wasn't around. In those days Ibi was busy disappearing as well, busy dissolving, busy distancing herself from the world that had brought her forth.
Hofmeester looked at his silverware. He was alone with his youngest daughter, and he was going to stay alone with her.
"Things happen for a reason, and if they don't happen, there's a reason for that too. The fact that you still haven't lost your virginity is because you haven't met the right person yet."
She sighed, Tirza did, and said: "Pppfff." And then she said "Pppfff" again. She still had half a serving of panna cotta on her plate, she cut it into three pieces with her spoon. "That's such complete bullshit, Daddy," she said. "That's so passé. It's not whether you lose your virginity to the right person. It's whether or not it happens. That's the important thing. That's the only thing that matters. I want you to help me. I want you to tell me who I should lose my virginity to."’