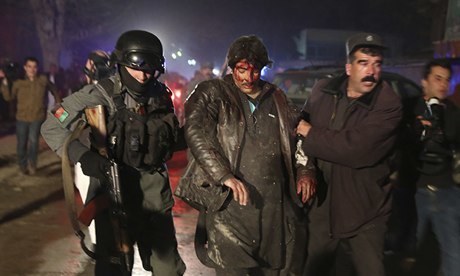 Graeme Smith in The New York Times on Afghanistan and the withdrawal of Western troops:

“Yet if Afghans are too scared about the withdrawal of American troops, the United States government may not be scared enough. In its latest report to Congress, the Pentagon said that fighting had eased in 2013, reporting a 12 percent drop in security incidents over the previous summer.
The United Nations, by contrast, found an 11 percent increase between May to August 2013, compared with the same period in 2012. During my visits to seven Afghan provinces over the last year, I saw no sign of the war cooling down.
In the short term, the Taliban are very unlikely to take over the country, or even march on major cities, but trouble should be expected in smaller outposts. Peace negotiations with the Taliban have stalled. This, combined with the imminent pullout of foreign forces, has given insurgents renewed confidence that the military balance of power will shift in their favor. In Kandahar last summer, one Taliban supporter (and sometime participant) confidently predicted that the insurgents would soon capture Kabul, repeating the northward sweep that brought them to power in 1996.”

I would say that’s not very clear where the Afghan government ends and where the Taliban begins, and that's a problem. The Afghans I spoke to in Kabul, Mazar-I-Sharif and the Panjshir Valley were not worried about the imminent withdrawal of the NATO troops.
Most of them insisted that compared to 2005 or 2003 things have gotten worse. The government is corrupt, incapable and untrustworthy and the presidential candidates are just more of the same.
The Taliban is Pakistan in disguise and Pakistan is supported by the US.
Well, you can imagine what their conclusion was going to be.

The Taliban could come to power in 1996 because they provided a sense of security, after the behavior of many warlords went out of control. A few of those old warlords are again in power, but they behave a bit more moderately. They don’t rape randomly anymore, they are more interested in stealing Western money still pouring into the country than raping. After all, why rape if you have enough money to buy?

Mr. Smith insists that the bilateral security agreement must be signed. And I’m pretty sure that it will be signed, but whether it will do much good to the Afghan people is doubtable.

Tonight around 7:30 PM I heard a big boom. It was the attack on a Lebanese restaurant in Kabul, where I had wanted to have lunch a few days ago. I’m fond of Lebanese food. According to the latest news three suicide bombers killed at least 14 people.
Around 9 PM we (my Afghan friends and I) drove past the area where the attack had taken place. Special forces were present and at my hotel the guards were tense. One of them said: “If they have gone to the 14th street they will come to this street as well.” Perhaps without security agreement we will have even more suicide bombings in Afghanistan, perhaps.

(Read the article about bombing of the Lebanese restaurant here.)