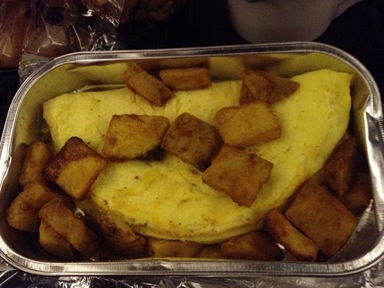 Lizette Alvarez in the NYT on the advantages of kosher food:

‘Captive diners know that a good meal is hard to find.
Airplane passengers, for instance, have been known to order kosher meals, even if they are not Jewish, in the hope of getting a fresher, tastier, more tolerable tray of food. It turns out that prison inmates are no different.
Florida is now under a court order to begin serving kosher food to eligible inmates, a routine and court-tested practice in most states. But state prison officials expressed alarm recently over the surge in prisoners, many of them gentiles, who have stated an interest in going kosher.
Their concern: The cost of religious meals is four times as much as the standard fare, said Michael D. Crews, who is expected to be confirmed as secretary of the Department of Corrections in March.
“The last number I saw Monday was 4,417,” Mr. Crews said of inmate requests at his recent confirmation hearing before a State Senate committee. “Once they start having the meals, we could see the number balloon.” To which, Senator Greg Evers, the Republican chairman of the Senate Criminal Justice Committee remarked: “Is bread and water considered kosher? Just a thought. Just a thought.”’

“Inmates have a lot of paranoia about what they are being fed,” said Gary Friedman, a chaplain who is chairman of Jewish Prisoner Services International and has dealt with the issue of kosher prison meals for more than two decades. “About how the food could be adulterated, how the prison uses out-of-date products, how they use things that don’t meet U.S.D.A. standards, how sex offenders may be handling their food.” “If they are using prepackaged, sealed meals, the inmates believe they are safer,” he said.
In the past, some gang members have declared themselves Jewish so they could sit apart, in the kosher meal section, and talk business. The meals are sometimes bartered for coveted items.
Eventually, inmates grow bored with the narrower offerings. “And then what happens?” Mr. Friedman said. “It drops off.” But the question of who gets a kosher meal is tricky. In all, less than 1.5 percent of the country’s 1.9 million inmates are Jewish, according to the Aleph Institute, a social services organization, and many do not even request kosher meals. “Who is a Jew?” Mr. Rassbach said. “People disagree about who is a Jew.”’

I would say on planes and in prisons, you are a Jew if you order kosher food.

By the way, I do not agree that kosher meals served by airlines are better than their “normal” meals. But it’s true that the quality of food served in economy class has been deteriorating.