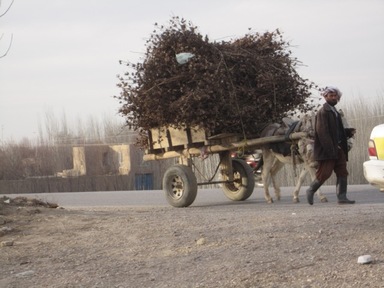 Matthew Rosenberg in the Times on the thin line between Karzai and the Taliban:

‘It was the kind of dossier that the Taliban often publish, purporting to show the carnage inflicted during a raid by American forces: photographs of shattered houses and bloodied, broken bodies, and video images of anguish at a village funeral, all with gut-churning impact and no proof of authenticity.
But this time, it was the government of President Hamid Karzai that was handing out the inflammatory dossier, the product of a commission’s investigation into airstrikes on Jan. 15 on a remote village and the supposed American cover-up that followed.
In an apparent effort to demonize their American backers, a coterie of Afghan officials appears to have crossed a line that deeply troubles Western officials here: They falsely represented at least some of the evidence in the dossier, and distributed other material whose provenance, at best, could not be determined.’

‘“Villagers on the streets and even inside their houses were shot,” said Abdul Satar Khawasi, a member of Parliament from the area who led the investigation. “Ten houses were destroyed.” He said the bulk of the evidence came from two sources: accounts given by villagers, and the photographs and video that were distributed last Sunday by Mr. Karzai’s office.
No commission members appear to have actually visited Wazghar. Instead, Mr. Khawasi sent his driver and a bodyguard to conduct the interviews and take photographs and video, according to Mr. Salangi, the provincial governor.
But at least two of the images distributed in the dossier could not have shown casualties from the Wazghar strikes, because the photos are more than three years old.
One was taken at the funeral of victims of a NATO airstrike in northern Afghanistan in 2009, which killed at least 70 civilians. It was distributed by Agence France-Presse and Getty Images and published in The Times on Sept. 5, 2009, along with an article about the airstrike.
The origins of the second misrepresented photograph are murkier. It shows the bodies of two boys wrapped in burial shrouds, and has been used for years on websites assailing civilian deaths in American drone strikes in Pakistan.’

Is it fair to say that a war that lasted more than ten years resulted in a democracy that brought Taliban light to power? It’s my understanding that those who are not Taliban light in Afghanistan have left the country or are looking forward to leaving the country. And I fear that most of the Afghans who despise the Taliban despise the Americans (and the West for that matter) as well.
Soon we should ask ourselves: did we do much better than the Russians? For one, we lost not as many soldiers – but besides that?