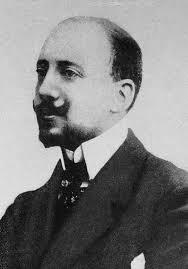 This review by David Gilmour in NYRB makes you want to read d’Annunzio’s biography by Lucy Hughes-Hallett:

“On a summer afternoon in Tuscany in the years of the belle epoque, a celebrated French courtesan alighted from a carriage to greet her host, the poet Gabriele d’Annunzio, and was astonished to behold “a frightful gnome with red-rimmed eyes and no eyelashes, no hair, greenish teeth, bad breath, [and] the manners of a mountebank.” Wondering how he could have acquired a reputation as a ladies’ man, Liane de Pougy resisted his advances, climbed back into the carriage, and declined a subsequent offer to revisit the poet’s villa.
To be fair to d’Annunzio, the lady’s response was unusual and indeed unfair. He may have been short and unhandsome, but gnomishness and mountebankery were accusations not made by other women. He was certainly a show-off and often a poseur, and he was a shameless self-publicist: as a teenager he had spiced up his reputation as a romantic poet by fooling a Florentine editor into thinking he had been thrown by his horse and died a tragic death. He was also a narcissist of the most fastidious kind.
Yet many women were entranced by d’Annunzio’s energy and flamboyance, by his intellectual brilliance, and by his romanticism and amaranthine extravagance: he would arrange adulterous assignations in rooms hung in green damask; he would buy Persian carpets for his horses to lie down upon; he would visit a mistress in Capri and hang flowers made of Murano glass on all the shrubs in her garden.”

D’Annunzio is a vivid example that fascism and romanticism go hand in hand.