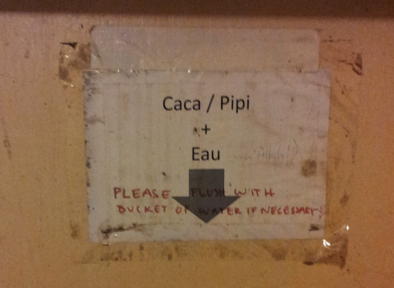 The day I arrived in Mweso the project coordinator told me that totally coincidently two reporters from the Washington Post had dropped by earlier that morning; they were moving on bikes to cover a story about this part of Congo. And they had asked if they could leave their luggage for a while at MSF.
I found the fact that they were moving on bikes very impressive. A month ago or so I met in Afghanistan a young man who was born in Afghanistan but who grew up in the Netherlands; he had travelled around in Afghanistan on a bike. But I believe I would rather travel through Afghanistan on a bike than through Congo.
Later that night the reporters were having drinks in the lounge of this MSF-house. One of them, Sudarsan Raghavan, told me that he had been bureau chief for the Washington Post in Baghdad.
I said: “Once I played poker at the Washington Post in Baghdad, you were based behind Al Hamra Hotel weren’t you?”
“Yes, that was us,” he said. “When was it exactly that you played poker in Baghdad?”
“I would say March 2009,” I answered.
“I left April 2009, I cannot remember you.”
To be perfectly honest I couldn’t remember him also. Maybe he skipped the poker that night. It didn’t matter, just meeting Raghavan brought memories back of the Al Hamra and my stay in Baghdad in 2008 and 2009.
Sudaran’s photographer, a man named Pete, chimed in. “Hey dude,” he asked, “where do you live?”
Pete turned out to be an utterly charming man who reminded me slightly of the photographer in “Apocalypse Now.” Just slightly. Of course, there is no Kurtz in Congo these days, at least not at MSF.

(This blogpost was read by MSF and no changes were made.)