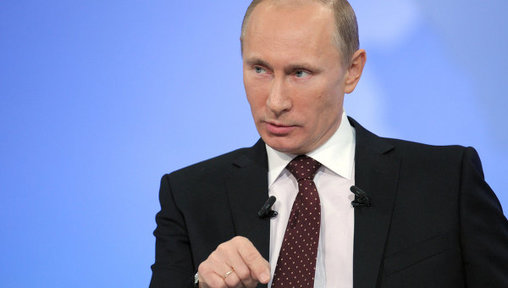 On Putin as a student of German:

‘As Vladimir Putin has become a man widely viewed as the world's most high-profile bully for his takeover of Crimea, one elderly Tel Aviv woman – a native of Ukraine – is thankful for the generosity of the Russian president she remembers as a teenager, when he was her "disciplined" student of German.
Mina Yuditskaya Berliner, 93, knew Putin when he was a 15-year-old boy studying German at St. Petersburg's High School 281.
"He was disciplined and wasn't a chatterbox," Yuditskaya Berliner told Ynet in an interview at the Tel Aviv apartment she says Putin bought her. Putin, she recalled, was a quiet and serious student who missed some classes because of his wrestling training but still knew the answers to the questions.’

‘Yuditskaya Berliner, who was born in the Ukrainian city of Mena in 1921, renewed her relationship with Putin after she recognized him on TV in the late 1990s. When he visited Israel in April 2005, she told the Russian Consulate in Tel Aviv that she wanted to meet him.
After moving to Israel in 1973, because, she said, she had had enough of the suspicion, terror and fear of the Soviet regime, Yuditskaya Berliner worked at the Israel Air Force, but refused to provide details about her work there.
When she and Putin met at the David Citadel Hotel in Jerusalem, a meeting the Russian Embassy in Israel confirmed to Ynet, Yuditskaya Berliner sat across the table from Putin, after which he invited her to another room for tea. "While walking, he told me: 'I've gone bald already,'" she told Ynet. "And I responded, 'I see.'"
Shortly afterward, said Putin's former teacher, she received gifts – an inscribed watch, Putin's autobiography and, finally, the choice of one of two apartments in Tel Aviv. She chose the smaller one, saying she just needed to close to the bus stop, the health clinic and the market.
She said she didn't know why Putin bought her an apartment, but was very thankful for it. "Putin is a very grateful and decent person," she said. Yuditskaya Berliner hasn't been in touch with her former student recently, though, saying, "Now he's too busy."’

(Read the article in Ha’aretz here.)

It’s extremely generous to give your former German teacher an apartment, but it’s wise that Yuditskaya Berliner chose the smaller apartment.

Also, it’s probably safe to say that Putin’s command of the German language is crucial to him. Perhaps he believes that in order to be the master of the world you need to be able to speak German. Or he was once taught that reading Marx in the original language was an absolute must.

Not too long ago I talked to a professor in comparative literature who insisted that reading Plato in translation was a waste of time. “Based on the different translations,” he said, “you can reach completely different conclusions.”