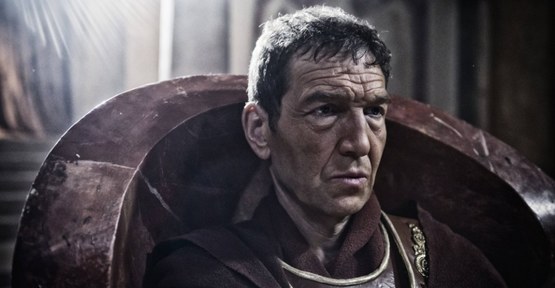 On Saturday afternoon I took to the train to the city of Amersfoort, 30 miles southeast of Amsterdam. I had never been to Amersfoort, except for the station where I had changed trains rather often. As a child I traveled every year with my parents by train from Amsterdam to Berlin and we had to change trains in Amersfoort.
But yesterday I wasn’t going to Berlin, I was going to see a play about Pontius Pilate in Amersfoort. (See: here.)
My expectations of the city were rather low, but the food in restaurant Merlot was excellent, and the cab that drove me from the restaurant to the theater turned out to be a so-called “ladycab” i.e. a taxi that is female friendly. Apparently, many women in Amersfoort and its surroundings had complained about male taxi drivers who were asking indiscrete questions or drivers who had the habit of making rather obscene proposals to their female clients, especially in the evening and early morning.
So some women in Amersfoort decided to insist on female drivers and that’s how the ladycab started.
See here for more information about the ladycab.
The female driver of the ladycab told me: “Of course, I have quite a few regular customers, mainly women, but there are men in Amersfoort who enjoy the ladycab also.”