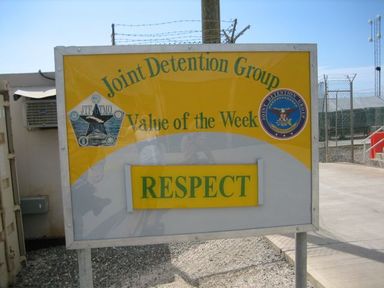 Last February I went to Guantánamo Bay – I hope to go back one day.
The New York Times reports:

"The facts of Omar Ahmed Khadr’s case are grim. The shrapnel from the grenade he is accused of throwing ripped through the skull of Sgt. First Class Christopher J. Speer, who was 28 when he died.
To American military prosecutors, Mr. Khadr is a committed Al Qaeda operative, spy and killer who must be held accountable for killing Sergeant Speer in 2002 and for other bloody acts he committed in Afghanistan.
But there is one fact that may not fit easily into the government’s portrait of Mr. Khadr: He was 15 at the time.
His age is at the center of a legal battle that is to begin tomorrow with an arraignment by a military judge at Guantánamo Bay, Cuba, of Mr. Khadr, whom a range of legal experts describe as the first child fighter in decades to face war-crimes charges. It is a battle with implications as large as the growing ranks of child fighters around the world."