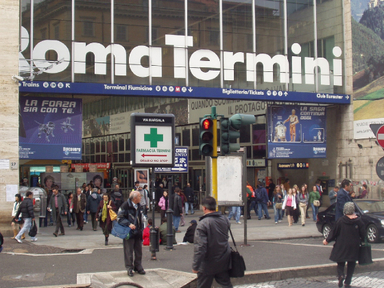 On Sunday afternoon around 5:30 p.m. I arrived at Roma Termini. There was quite a lot of police at the train station, probably because of the canonization of two popes. Canonization is comparable to a soccer match, the fans can get rowdy after having won the championship.
There was a line for the cabs, and before I could make it to the line a man in his forties had grabbed my suitcase.
“Taxi,” he said, in English with a sexy Italian accent, “what address?”
I decided to follow him because he was carrying my suitcase and I thought: what the heck, there’s a line for the cabs. This may be the faster solution.
The man walked me and my suitcase to his car, an old Volkswagen that was everything but a taxi. He put my suitcase in the trunk and then he showed me a document. “I’m a taxi, official document from Rome.”
But since I’m not analphabetic I could see that the document was indeed an official document but it had nothing to doing with taxis. The document stated that the holder of this document was severely handicapped and was allowed to park his car at places where people who were not physically challenged were not allowed to park their car.
The man was clearly not an official taxi driver, but as far as I could see he wasn’t severely handicapped either. Things were getting interesting.
At this point I decided that it was good to discuss the rate.
“How much is it to Via Veneto?” I asked.
“50 euros.”
“No,” I said, “impossible, it’s five minutes by car.”
“No,” the man shouted, “it’s because of the pope. Today big day for the pope. Many people in Rome. City closed. Flat rate because of the pope. All taxis 50 euros. The city of Rome makes me do this.”
I listened to him and he realized that he said that it was the pope’s fault that he was going to finagle me out of 50 euros. This was such a beautiful and daring logic that I decided to answer: “I will give you 50 euros.”