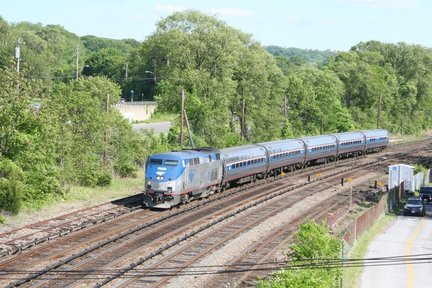 The train from Albany to New York stopped somewhere between Poughkeepsie and Yonkers. "There is a train in front of us that is unable to move," the conductor said.
Shortly after this a rather heavy woman started a conversation with my neighbors, a conversation which soon went into the surprising direction of homemade granola. My neighbors, a man and a woman in their fifties, and the other woman were first discussing the perils of traveling by train.
“Do you want to taste my homemade granola?” the rather heavy woman asked suddenly. “If you give me your address I can send you my granola.” They had met five minutes ago, and just because the train had stopped and we all feared a long delay some of the passengers had started socializing with each other.
I realized that this is something that would never happen on a plane. You don’t ask a stranger on a plane after five minutes of more or less polite conversation: “Can I send you my homemade granola?” Then the heavy woman asked the couple: “What do you do for a living?”
“We are acrobats,” the man said, “we do an act with a chandelier.”
“Nice,” the heavy woman said. “Acrobats.”
The other woman clearly wanted to mitigate the rather uncomfortable silence and she said: “I will give you his address. You can send your homemade granola to him.” For a second also I believed the man, perhaps these people were acrobats.
But within hours I came across this article on CNN: “Human chandelier' falls: 9 performers hurt in Rhode Island circus accident” (Read the article here.)

In hindsight I felt even worse for the slightly overweight woman. Probably she just wanted to have a decent conversation about food with strangers on a train.
But there’s a lesson to be learned here: don’t mention your homemade granola.