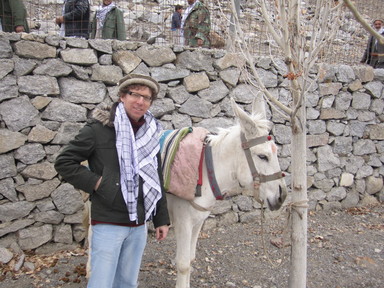 “So have you been in contact with the Dutch police mission?” a woman in the audience asked. She was referring to the Dutch police training mission in the Afghan province of Kunduz.
Together with Qader, my Dutch-Afghan friend, I was talking in a church in the city of Nijmegen about the trip we made to Afghanistan in January.
“Yes,” I said, “while being embedded with the German army in Kunduz in the fall of 2011 a German officer told me: ‘We won’t have a look at the training sessions, because that’s a bit absurd.’”
The woman wasn’t satisfied with my answer. She herself had worked as a human rights advisor for the Dutch police training mission in Afghanistan, and according to her experiences the Afghan policemen and policewomen were eager to hear about human rights issues. They wanted to learn about these things. The woman added that the police training mission should have continued.
Another man in the audience said: “You are too negative about the things that have been accomplished in Afghanistan.”
There were a few Afghans in the audience as well. One of them remarked: “We Afghans are not proud of our health care system or our education system, we are proud of our hospitality. What do you think about our hospitality?”
Later he said: “I hear you are looking for an Afghan wife, if you need help let me know.”