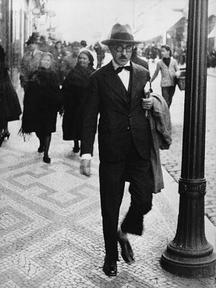 Christine Smallwood in The New Yorker on reading:

“The number of Americans who read books has been declining for thirty years, and those who do read have become proud of, even a bit overidentified with, the enterprise. Alongside the tote bags you can find T-shirts, magnets, and buttons emblazoned with covers of classic novels; the Web site Etsy sells tights printed with poems by Emily Dickinson.”

In my novel Phantom Pain (2000) the main character, a novelist in decline, tries to survive financially by printing excerpts from his novels on pillowcases. I’m not sure if it’s been done already, but it’s definitely worth trying. Who doesn’t want to sleep on his favorite quote?

‘“I thought of my adventure as Off-Road or Extreme Reading,” Phyllis Rose writes in “The Shelf: From LEQ to LES,” the latest stunt book, in which she reads through a more or less random shelf of library books.’

‘She is clear-eyed about what awaits her on LEQ-LES. “I had no reason to believe that the books would be worth the time I would spend on them,” she writes. “They could be dull, even lethally so.” She stops short of claiming that the whole of a mediocrity is worth more than the sum of its parts; it is the uniqueness of her whole that excites. “I was certain, however, that no one in the history of the world had read exactly this series of novels.” Rose’s paean to arbitrariness is telling. She brings an element of chaos to a reading culture that is otherwise corralled by algorithms. She could read this shelf or that shelf or that other shelf over there. For her, arbitrariness doesn’t mean that her experience is interchangeable. It is, on the contrary, irreplaceable.’

I’m not convinced that random reading is the future of reading, but perhaps it’s healthy to decide that, let’s say, in the second half of 2014 you will read only authors whose name starts with a “B”: Babel, Balzac and Bachmann, to name just three.

Rose’s paean to arbitrariness can be seen as a protest against commercialism or perhaps it’s just sophisticated cynicism. “I’m not able to read your new novel before the summer of 2019, your last name starts with the wrong letter.”