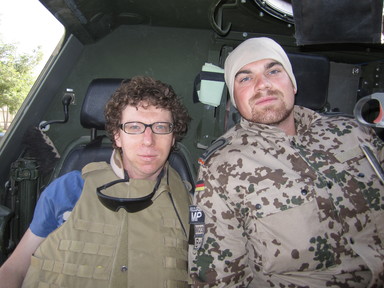 “Today, with Pakistan torn apart by unprecedented violence and the situation in Afghanistan still precarious, the Pakistani military has strong reasons to change its past policies of sponsoring wars fought by nonstate organizations. Some changes are happening, but only at a glacial pace. Serious reform needs to start at the lowest level of the military, at the schools and colleges from which the army is drawn, where drastic curriculum changes are needed. The ISI needs to be brought under a code of conduct and accountability, particularly with respect to its dealings with violent organizations. Its personnel should be trained in political realism rather than in ideological prejudices. Unless changes in the army can be made more quickly, there is still the danger that this nuclear power could slip into chaos.”

Rashid appears to be more nuanced about Pakistan than Gall is. We cannot blame the mess in Afghanistan solely on the ISI.
Yesterday after the reading in Berlin, somebody in the audience hoped to provoke a political discussion by blaming America for most if not all evil in the world.
Yes, we need a perpetrator – we need a bad guy. Remember, Al Pacino’s famous monologue in “Scarface”? “You need people like me so you can point your fucking fingers…”