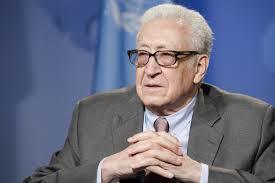 This interview in Der Spiegel with Lakhdar Brahimi, former UN special envoy to Syria – I listened to him when he spoke at the Munich Security Conference earlier this winter and I was impressed – is worth reading.

“SPIEGEL: What is your prediction for the future of Syria and the region? Brahimi: Unless there is a real, sustained effort to work out a political solution, there is a serious risk that the entire region will blow up. The conflict is not going to stay inside Syria. It will spill over into the region. It's already destabilizing Lebanon, there are 1.5 million refugees in the country; that represents one third of the population. If it were Germany, it would be the equivalent of 20 million. It is destabilizing because ISIS …
SPIEGEL: … the most radical and brutal armed opposition group, which seeks to establish a militant Islamic state … Brahimi: … is active in both Syria and Iraq already, and Jordan is really struggling to continue resisting. Even Turkey! According to a senior Iraqi official, ISIS has carried out 100 operations in Syria and 1,000 operations in Iraq in just three months.
SPIEGEL: How could these radical forces emerge so quickly? Sources say that the Syrian regime itself helped unleash this phenomenon deliberately -- that they have released hundreds of extremists from their prisons, even encouraging them to create an enemy that they can legitimately fight against. Is this correct?
Brahimi: I have heard this several times. People will tell you that ISIS controls one province and the government never attacks them. It is probably the government's way of saying: "This is the future you will have if we are not there anymore."
SPIEGEL: Will the states of Jordan, Iraq, Lebanon and Syria be able to survive?
Brahimi: They will not completely disappear as states, but it reminds me a lot of 1999. Then, I resigned from my first assignment as UN special envoy to Afghanistan because the UN Security Council had no interest in Afghanistan, a small country, poor, far away. I said one day it's going to blow up in your faces. It did.”

This is what Mr. Brahimi said in Munich already, almost 5 months ago. But still, nobody is listening.

“SPIEGEL: What do you think will ultimately become of Syria?
Brahimi: It will be become another Somalia. It will not be divided, as many have predicted. It's going to be a failed state, with warlords all over the place.
SPIEGEL: What can the international community do, Europe in particular? What should Germany do?
Brahimi: The people in your governments know how dangerous this crisis is and how important it is to support a political solution.
SPIEGEL: Are you referring to the 320 Germans that have thus far joined ISIS?
Brahimi: And to the 500 or 600 French, the 500 or 600 British, and so on and so forth. There are several thousand non-Syrians. My goodness! These are your nationals that are training in Syria and that are part of ISIS, which believes that you have got to build an Islamic state all over the world, starting with Berlin. That's a threat to you, isn't it?”

Mr. Brahimi is voicing what Obama concluded a while ago, that ISIS is a bigger threat to the West than Assad.