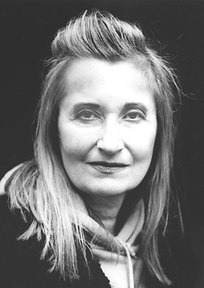 Elfriede Jelinek won the Nobel Prize for literature in 2004 – I interviewed her in 2005 for Dutch television.
Nowadays she concentrates on writing plays, although her plays are by no means plays in the traditional sense of the word.
For example the play I saw tonight “Die Schutzbefohlenen” (the title is a play on Aeschylus’ text “The Suppliants”) is a long text without dialogue that is cut quite drastically by the director and the dramaturge. You can read the text here in German.
The actors were partly professional actors rom Germany, partly asylum seekers (undocumented aliens) who are living in Amsterdam.
The performance was highly political – for one reason because more than half of the performers weren’t playing illegal aliens, they were illegal aliens – but the risk with plays like these is that you end up preaching to the converted.
The dilemma of political theater is the same dilemma humanitarian aid workers encounter: are the humanitarian aid and the political theater part of the solution or are they unwillingly part of the problem? Do they help to prolong the status quo they claim to detest?