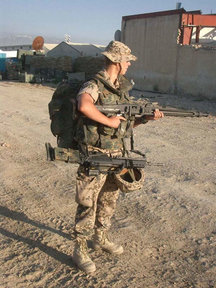 Today I taught Dutch soldiers (not only soldiers of course, also other military personnel) how to write about their experiences in Afghanistan.
Twenty soldiers had enrolled for this “literary boot camp”.
Seven showed up. As one of the press officers said: “There are a lot of no-shows.” Nevertheless I don’t consider this day a failure, quite the opposite.
One of the participants, a female lieutenant, said she had run the marathon in Tarin Kowt, Afghanistan. She managed to do so by running a few times around the camp.
Of course she could not really leave Camp Holland, this was much too dangerous.
A remarkable woman.