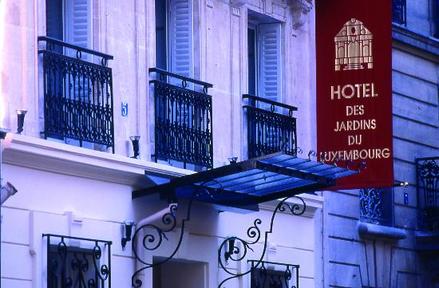 This morning a young American entered the breakfast room of Hotel Les Jardins du Luxembourg in Paris.
The waitress who happened to be also the chambermaid asked him what he wanted to drink. “Give me a coffee,” he said, “but give me also a plastic cup, please. I’d like to take the coffee out.”
“Pardon,” the waitress said.
“A plastic cup,” he said.
The waitress left and came back, obviously confused, her command of English was limited.
“What is it you want?” she asked.
“A plastic cup,” the man shouted. He believed that if you shout loud enough eventually the slaves are going to understand you.
The waitress left, the front desk manager came.
“How can I help you?” she asked.
“I want a paper cup or a plastic cup to take my coffee out,” the man said.
“We don’t do that,” she said.
“It’s a three-star-hotel,” the American replied, “you should consider plastic cups or paper cups.”
“We serve breakfast, here or in the room, but we don’t serve breakfast on the street.”
“No need to be impolite,” the man said.
“All I’m saying is that we don’t serve breakfast on the street,” the front desk manager answered.
“I will never come back to this hotel.”
“And I will search for a plastic cup.”
The front desk manager left and five minutes later the American left without his plastic cup.
Later that day I saw him smoking on the street. He was still angry.