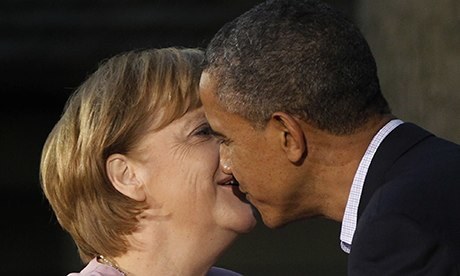 Alison Smale, Mark Mazzetti and David E. Sanger on spying in Germany in the NYT:

'Clemens Binninger, a member of Ms. Merkel’s party, said the decision to expel the station chief was “a political reaction of the government to the lack of willingness of American authorities to help clear up any questions” over American surveillance of Germany and its leaders.

Both Thomas de Maizière, the interior minister, and Wolfgang Schäuble, the finance minister and a close ally of Ms. Merkel, suggested that the material handed to the Americans from the German intelligence employee arrested last week was nothing important. The Americans, Mr. Schäuble said, had simply proved to be stupid.

“With so much stupidity, you can only weep,” he said. “And that is why the chancellor is ‘not amused.’ ”'

That's the most frightening part of this affair, the apparent stupidity of world class spy agencies. If they want to spy on allies, at least let them discover something important.

Mr. Schäuble is right, in the end it's stupidity that makes you weep.