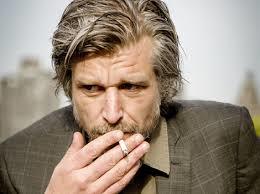 Tim Parks on sales, Knausgaard, the past and the blurring line between fiction and literature:

Well, as of a few days ago UK sales of all three volumes of Knausgaard work in hardback and paperback had barely topped 22,000 copies. A respectable but hardly impressive performance. In the US, which has a much larger market, that figure— total sales of all three volumes (minus e-books)—stood at about 32,000. This was despite the fact that with Knausgaard’s growing reputation the powerful Farrar, Straus and Giroux stepped in to buy the paperback rights from the minnow Archipelago and bring its own commercial muscle to bear. On the Amazon bestsellers ranking, A Death in the Family, the first and most successful volume of the My Struggle series, is presently 657th in the USA and 698th in the UK, this despite a low paperback price of around ten dollars.
So what is going on here? Should we be reassured that critics are sticking loyally by a work they admire regardless of sales, or bemused that something is being presented as a runaway commercial success when in fact it isn’t? Wouldn’t it be enough to praise Knausgaard without trying to create the impression that there is a huge international following behind the book? Or do the critics actually assume that everyone is buying it because they and all their peers are talking about it?

“Certainly now, for better or worse, almost all distinction between the way different kinds of novels are presented has largely disappeared. Newspapers review Dan Brown, Alice Munro, J.K. Rowling, and Orhan Pamuk with equal solemnity, attention being driven by the sense that the writer is winning prizes or moving copies or being pushed as the book of the season by a major publisher, not by a lucid curiosity for whatever may be written between the covers. At the same time serious publishing houses have discovered the trick of packaging genre fiction as if it was great literature; one thinks of the prestigious Italian publisher Adelphi, reissuing all seventy-five of Simenon’s Maigret novels in very much the same format and with the same $25 price tag as their editions of Thomas Bernhard, Sándor Márai, or Nabokov. Even the academics have joined in with whole conferences dedicated to, for example, the “problem” of translating the character names in the Harry Potter saga. No one wants to be left out of a global success.
Meantime, since most newspapers have gone online and many have their own online bookshops, a certain confusion seems to be developing between reviewing and sales promotion. Bestseller lists sit beside reviews on every webpage, as if commercial success were an index of quality, while one can often click on a link at the end of a review to buy the book. Literary novels come complete with stickers announcing them as international bestsellers as if this were a part of their literary achievement. In Europe publishers never forget to tell readers in how many countries the author’s work is published.
Although readers tend to prize writers for their independence from influence, they also seem eager to buy the works of writers who have attracted the highest number of readers; at the same time it’s hard to imagine that the writer him or herself will not be influenced by the confirmation that commercial success brings. Would J. K. Rowling have written seven Harry Potters if the first hadn’t sold so well? Would Knausgaard have written six volumes of My Struggle, if the first had not been infinitely more successful (in Norway) than his previous novels? Sales influence both reader and writer—certainly far more than the critics do.
In general I see nothing “wrong” with this blurring of lines between literary and genre fiction. In the end it’s rather exciting to have to figure out what is really on offer when a novel wins the Pulitzer, rather than taking it for granted that we are talking about literary achievement. But it does alert us to the fact that as any consensus on aesthetics breaks down, bestsellerdom is rapidly becoming the only measure of achievement that is undeniable.”

Indeed, consensus on aesthetics has already broken down and bestsellerdom is the only true measure of success, at least in my native country but I’m doubtful whether the situation is different elsewhere. Well, my Egyptian publisher told me that he doesn’t believe in bestsellerdom, but I assume that in Egypt even publishers have other things to worry about than the bestseller list. Probably there is not even such a list in Egypt.

A footnote – I would say that Simenon is “high literature” and I don’t believe that Pamuk’s novels are going to survive for a long time.