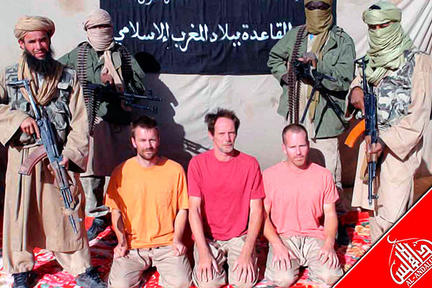 Terrorism, kidnappings and business – please read this article by Rukmini Callimachi in NYT:

‘“Kidnapping for ransom has become today’s most significant source of terrorist financing,” said David S. Cohen, the Treasury Department’s under secretary for terrorism and financial intelligence, in a 2012 speech. “Each transaction encourages another transaction.” And business is booming: While in 2003 the kidnappers received around $200,000 per hostage, now they are netting up to $10 million, money that the second in command of Al Qaeda’s central leadership recently described as accounting for as much as half of his operating revenue.
“Kidnapping hostages is an easy spoil,” wrote Nasser al-Wuhayshi, the leader of Al Qaeda in the Arabian Peninsula, “which I may describe as a profitable trade and a precious treasure.”’

In Afghanistan NATO paid the Taliban consciously and unconsciously.

Now it turns out that we finance the terrorist networks we are trying to disrupt. Foreign policy is surrealism with lots of destruction on the side.