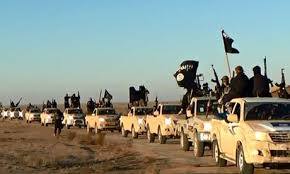 A friend alerted me to this article in The Independent:

‘How far is Saudi Arabia complicit in the Isis takeover of much of northern Iraq, and is it stoking an escalating Sunni-Shia conflict across the Islamic world? Some time before 9/11, Prince Bandar bin Sultan, once the powerful Saudi ambassador in Washington and head of Saudi intelligence until a few months ago, had a revealing and ominous conversation with the head of the British Secret Intelligence Service, MI6, Sir Richard Dearlove. Prince Bandar told him: "The time is not far off in the Middle East, Richard, when it will be literally 'God help the Shia'. More than a billion Sunnis have simply had enough of them."
The fatal moment predicted by Prince Bandar may now have come for many Shia, with Saudi Arabia playing an important role in bringing it about by supporting the anti-Shia jihad in Iraq and Syria. Since the capture of Mosul by the Islamic State of Iraq and the Levant (Isis) on 10 June, Shia women and children have been killed in villages south of Kirkuk, and Shia air force cadets machine-gunned and buried in mass graves near Tikrit.
In Mosul, Shia shrines and mosques have been blown up, and in the nearby Shia Turkoman city of Tal Afar 4,000 houses have been taken over by Isis fighters as "spoils of war". Simply to be identified as Shia or a related sect, such as the Alawites, in Sunni rebel-held parts of Iraq and Syria today, has become as dangerous as being a Jew was in Nazi-controlled parts of Europe in 1940.’ (…)

‘The Sunni caliphate rules a large, impoverished and isolated area from which people are fleeing. Several million Sunni in and around Baghdad are vulnerable to attack and 255 Sunni prisoners have already been massacred. In the long term, Isis cannot win, but its mix of fanaticism and good organisation makes it difficult to dislodge.
"God help the Shia," said Prince Bandar, but, partly thanks to him, the shattered Sunni communities of Iraq and Syria may need divine help even more than the Shia.’

Last fall in Munich a converted Muslim told me that Shia are not really Muslims and this July in Egypt I was surprised by the venom against Shia in the English editions of some Egyptian newspapers.
The question is what role should the West play in the Shia-Sunni war, and what role are we playing already by insisting that the Saudis are our friends and the Iranians are our enemies?