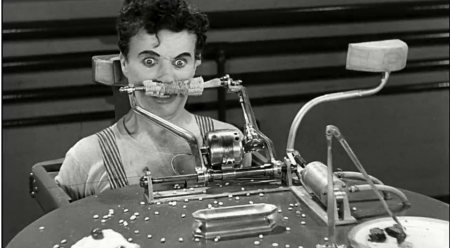 Tonight (Saturday) The New York Philharmonic played Charles Chaplin’s score “Modern Times”, while the film was screened.
The Avery Fisher Hall was sold out, my seat was somewhere in the back, for that reason I missed some details of the movie, but the movie was almost as powerful as when I saw it the first time, December 1977 in a beautiful movie theater in Amsterdam, Tuschinski 1.
It’s always hard to make these statements without mythologizing your own past, but I would say that seeing “Modern Times” when I was six years old changed my life. It made me realize that there was redemption, there was slapstick, there was comedy, in other words: there was an emergency exit.
The evening tonight started with the screening of Chaplin’s first movie in which the tramp appeared: “Kid Auto Races at Venice.” The audience was very mixed, young, old, female male, a few kids, mostly white but not overwhelmingly.
Unfortunately some people in the audience couldn’t resist the temptation and started texting or tweeting. To some the smart phone is just an excuse to glorify the Attention Deficit Disorder.