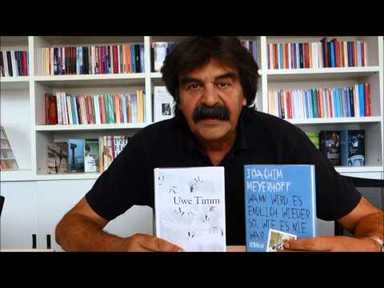 One of the more interesting and fascinating people I’ve met in the literary world in the last couple of months, maybe even years is Reinhold Joppich, manager at Kiepenheuer & Witsch in Cologne.
In September I had a reading at the publishing house in Cologne and after the reading I exchanged a few words with Mr. Joppich who immediately started to explain his love life to me; his choice of words, his passion, the twinkling in his eyes made it clear to me that this man belongs in a novel.
Mr. Joppich used to be a Maoist, but he realized that his love for women and good books was bigger than his love for Mao. I believe that this is a fair summarization of a big part of his life.
At the book fair in Frankfurt I met him again, he is going to retire in a few weeks. The other night during a dinner party I had a longer conversation with him.
Mr. Joppich has five children with five different women, and he declared: “Ich bin ein Opfer der Frauen.” (I’m a victim of women.)
He also said something like: "They steal my semen." Which is a fairly accurate description of a certain activity.
He added: "My mother taught me that you should love life."
I find myself too good of an author to become a ghostwriter, but for Mr. Joppich I will make an exception.