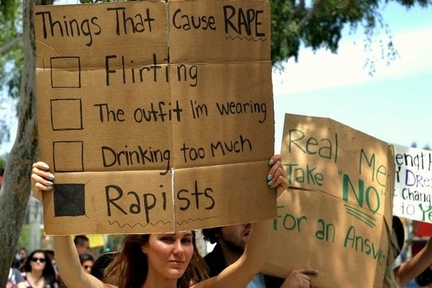 Emily Bazelon on the fight against date rape in NYT Magazine:

‘The intended lesson of this 90-minute workshop was that the line between a request and a demand, welcome interest and unwanted pressure, is usually fairly obvious. “This is the skill set people hammer out as little kids,” says Melanie Boyd, an assistant dean of student affairs. She wants students to realize that they know how to recognize agreement, refusal and ambiguity.
The workshop reinforced policies, newly adopted by a growing number of universities, requiring students to make sure they have continuing affirmative consent for every phase of a sexual encounter. The policies, many of which have gone into effect in the last year, were created to help clarify internal university investigations of sexual-assault accusations. In the past, the main question was whether the person (usually a woman) who claimed that she was raped had made it clear that she said no (“No means no”). The new rule shifts the inquiry to whether the student accused of assault got a signal of consent (“Yes means yes”). In California, Gov. Jerry Brown recently signed an affirmative-consent bill, making “yes means yes” the standard at the state’s colleges and universities. To continue to receive state funds for student financial aid, California institutions investigating allegations of sexual assault must determine whether both parties gave “affirmative, conscious and voluntary agreement.” Lack of resistance and silence no longer constitute proof of consent.’

Part of the problem is that a certain amount of aggression is considered male charm.

Also the question (“Can I kiss you?” for example) usually doesn’t precede the action. And how to say “no” without being impolite isn’t easy.

The important word that is missing in this interesting article is “rejection”.

Saying “no” is one thing. But there are still quite a few males around who can’t cope with perceived or real rejection.

If you want to fight date rape learn young males to deal with rejection.
T-Shirts with “Only Do It With Consent” may help but probably we need also T-Shirts with “I Was Rejected And I Liked It”.