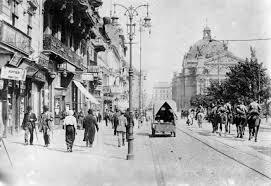 A journalist, Michiel Driebergen, gave me the book “Lviv, city of paradoxes” – it’s a beautiful photography book about Lviv or Lemberg or Lvov. (See: here.)
Jan Paul Hinrichs, professor in Slavic Studies, is quoted: “Lviv was more Jewish than ever in 1939, because many Jews had fled to the city from Poland which had been occupied by the Germans. After the Holocaust the city was more Polish than ever in its history, and shortly afterwards the city was completely Ukrainian and all Poles had left.”

To the best of my knowledge my father was conceived in Lemberg, but he was born in Berlin. His father, I recently found out, was born in 1871 in Krystynopil, nowadays Chervonohrad, about 50 miles north of Lviv.