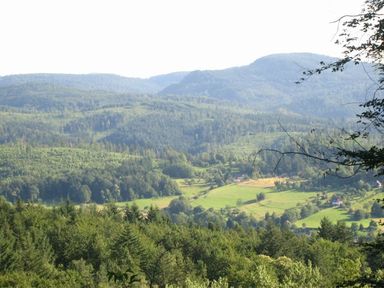 Debka reports: “Al Qaeda orders chief of its Palestinian wing not to free BBC reporter Alan Johnston or negotiate release of Israeli soldier Gilead Shalit.
The order appeared in an official al Qaeda Web site early Tuesday, June 19. It explains why Army of Islam leader Mumtaz Durmush is holding onto the British captive at the risk of a clash with the 500 Hamas Executive Force surrounding his compound in Gaza City. Although Britain maintains no official ties with Hamas, the MI5 domestic intelligence chief asked the Palestinian Islamists to refrain from releasing Johnston by force for fear of his life.”

In the meantime Mr. Schaevers and I walked from Gernsbach to Baden-Baden – quite a romantic walk through the woods and the hills of the Black Forest.
In Baden-Baden our dinner consisted of sausages.