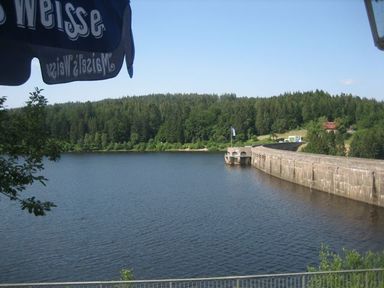 Also on the last day of my stay in Gernsbach Mr. Schaevers convinced me of the beauty of walking through the forest. Well, to be honest I was happy to be convinced of the necessity of doing something else than just reading, writing, sleeping and eating.
Today our goal was Raumünzach, mainly because from there we could go back by train.
Raumünzach turned out to be a station without a village, to be more precise without a café, a restaurant, a store.
Mr. Schaevers said: “Let’s hitchhike.” I was just about to take off my sunglasses in order to look less scary, when a woman stopped for us.
There were two young children in the car.
"Step in," the woman said.
Mr. Schaevers was seated on the backseat between the children.
I really hate to be optimistic, but when a mother with two children stops her car for two men, one of the two being me with sunglasses, there is hope. At least there is confidence in mankind.

(PS On a more culinary note: the sausages mentioned yesterday were Moroccan sausages. One can eat excellent in Germany.)